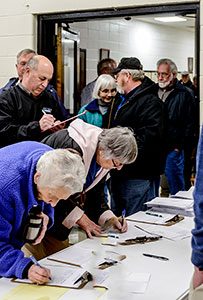 On Thursday January 25th, 2018, The Kent Conservation and Preservation Alliance hosted an open meeting to discuss the proposed new Bay Crossing.  Over 200 people gathered in a standing room only filled hall at the Chestertown Fire Hall. In addition to county residents, Kent County Commissioners Ron Fithian and William Short, Chestertown Mayor Chris Cerino, and other government representatives were in attendance.

Board members Janet Christensen-Lewis and Elizabeth Watson opened the meeting with a PowerPoint supported discussion of the MDTA process for developing  the location of a new Bay Crossing. She explained the  ramifications it could have on Kent County if the county was the selected site for the Eastern Shore landing point. The over riding emphasis of the presentation was the urgency of the need to act quickly to make Kent County’s opposition to a Bay Crossing landing in Kent County heard by the MDTA and other decision making State agencies and officials. While the study will not be completed until early 2020, the selection of possible routes will be made  in the fall of 2018. The best way to keep a crossing from coming to Kent County will be to keep it off the list of possible crossings. Ms. Watson discussed the time line of the study and pointed out the opportunities for public comment during the selection process. She emphasized the need to stay aware of these critical points for comment and  to submit comments by letter and email. 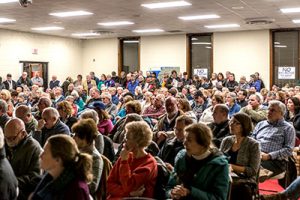 fter the presentation, Kent County Commissioners Ron Fithian and William Short  spoke about their appearance at the Finance Committee hearing on Senate bill 34. SB34 is  meant to overturn certain authority of the governments of the Eastern Shore to consent to any “toll road, bridge, or highway”. While they were the only county officials to appear at the committee hearing, all of the shore counties sent letters opposing SB34.

Next the meeting was opened up to the room for comments. A lively round of comments and ideas were offered by those in attendance on ways to go forward in opposition to the crossing. What came out of the discussion was a sense that this was more than a NIMBY issue but one of preserving the farmland, history and culture of Kent County.

KCPA will be scheduling upcoming meetings to keep the community informed on the status and progress of the process. You can sign up for their newsletter to find more information about the Bay Crossing project.